How 3D printing Can Benefit the Firearms Industry 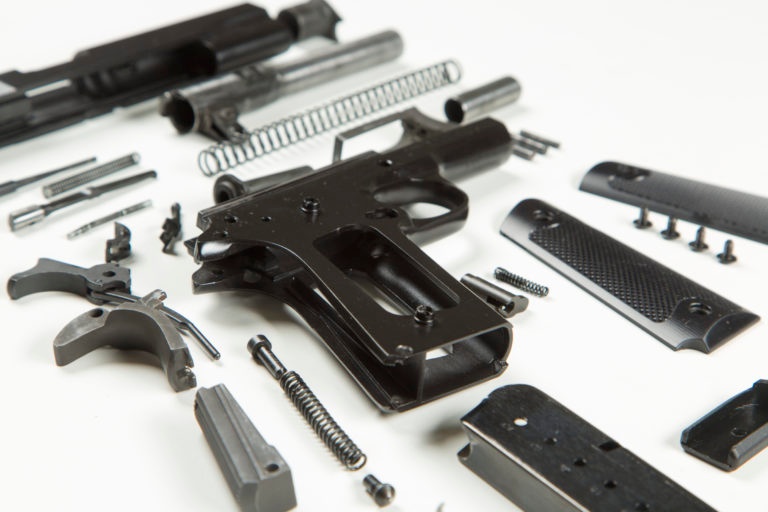 It’s truly interesting times for the firearms industry. The election of Donald Trump to the office of President of the United States has cooled the market somewhat, in a phenomenon known as the ‘Trump Slump’, though numbers reported via the FBI’s National Instant Check System (NICS, aka the ‘background check’ system) for firearm purchases still show record levels of commerce in the industry.

The feeling in the firearms scene is like “the dog that caught the squirrel”. After nearly a decade of panic buying by the public due to the threat of restrictive legislation, the industry doesn’t really know what to do with itself. The companies can no longer rely on just turning out yet another 9mm striker-fired pistol or yet another AR-15 rifle and sit back to watch it fly off the store shelves. The answer is simple, it’s time to innovate.

Whether it’s a new style of rifle, a suppressor with x amount of dB reduction versus the competition, a stylish handguard, a lightweight muzzle device, or any number of accessories, gun owners are now looking to “kit out” their purchases.

The old guard, loath to pivot, has been slow to respond. Releases from the old standbys in the firearms world have been evolutionary, and not revolutionary, with their new products being reskins of older models or slight ergonomic tweaks to last year’s gun. Which, in a way, makes sense, as they are burdened with a massive legacy infrastructure of old tooling and machinery. In the case of one storied rifle manufacturer, some of their equipment is older than the men and women operating it.

It’s here where the agility of the smaller firms come to light. Unburdened by legacy equipment and company policies, smaller firms have been racing to design new and innovative products for the firearms world. New and exciting designs for all manner of firearms and firearms accessories are born on the laptops of proverbial mad geniuses around the country. Armed with copies of AutoCAD (and probably a fair helping of strong coffee), these men and women have been working overtime to take advantage of the new climate in the “2A” scene in the United States. However, no matter how innovative a product looks in the virtual environment of an AutoCAD file, the product itself must be bought to life for the intensive testing and evaluation any firearm-related product requires.

Traditionally, this would mean an independent company or designer would have to invest tens of thousands of dollars, or more, just to produce a prototype. Even the molds for what could be a fairly simple design run high on the price scale. And often, the turnaround time is unacceptably slow, ranging well past 45 days before a prototype can often be delivered. These factors often lead to many designers giving up on their dreams, or they are forced to sell to one of the bigger players, and only collect a one-time fee for their hard work, at best. However, there is a solution.

Enter 3D printing. When one hears the term ‘3D printing’, it probably conjures up images of a tabletop gadget and a spool of plastic material, hooked up to a laptop’s USB port while an experimenter turns out a succession of small implements, toys, and shapes. Indeed, this is a great training and learning process, but as always, technology has marched on, with 3D printing having moved to a truly industrial scale, with the newest techniques being able to fabricate complex shapes from deposited metal powder, in a process known as sintering. Much like it’s plastic brethren, a 3D printer “fueled” by metallic powder can form complex shapes from a simple AutoCAD file, in a process generally known as additive manufacturing, aka AM.

In AM, layers of material are deposited to form an object – the term is synonymous and can correctly be used interchangeably with 3D printing. For comparison, older methods where objects were milled and shaped from a solid block of metal is considered ‘subtractive manufacturing’, since the process works by removing material. Additive, as it sounds, works by adding material as the process goes along. The benefits are ease of design (you don’t have to think about what’s being removed), speed, and a minimum of waste. In practical terms, the only material consumed is what is used to form the object. Also, AM techniques require far less “setup” than traditional methods. In a traditional subtractive setup, a technician must program massive machines, select the proper drill bits and other tooling to perform the material removal and shaping, and determine the limits of the machine itself. In AM, if the object fits on the “bed” of the 3D printer, it can generally be realized.

The end benefit is a far cheaper process and per-item cost that is delivered quickly.

This benefits the independent firearms designer enormously. A prototype can be produced rapidly, allowing for fast evaluation and adjustment of the item, if it is needed. Beyond prototyping, AM techniques can be used to mass-produce final products which are free of the traditional pitfalls of subtractive techniques where machinery stresses can cause imperfections in the final product, leading to inferior and potentially unsafe situations.

Furthermore, the degree of precision is much greater. In the world of firearms, the watchword is truly precision. Accessories should not adversely affect the point of impact in a gun, and critical components of the weapon such as the barrel should be able to produce an accuracy of 1 minute-of-arc or better. With AM techniques, this can be easily realized, and at a more cost-effective rate, leading to greater profits for the designer, cost savings for the consumer, or both. The precision of AM also leads to a more aesthetically pleasing product as well, with the product being free of the dimples, divots, and toolmarks that can plague traditional firearms manufacturing processes.

This is especially notable since firearms reviewers will often judge a product by its fit-and-finish, especially in the domestic market. While toolmarks and imperfections are expected from a $400 Warsaw Pact surplus weapon or accessory, it is generally unacceptable for a domestic product to sport the same defects. With traditional methods, this is difficult to achieve, and requires many man-hours of work and discarded errors before an acceptable final product is finished. After final acceptance of a design, an AM company such as 3DEO can churn out quality product after quality product from the first specimen out of the chamber, and at a cost that is far less than traditional methods. What are Your Options for Improved Surface Finishes After 3D Printing?