The Big Bet: Why GE Invested Billions (And Counting) in Additive Manufacturing

Additive manufacturing still seems risky for many manufacturers, but GE’s isn’t bluffing as they revolutionize their approach to global operations through an Advanced Manufacturing strategy that includes metal 3D printing at its core.

Branding itself as the world’s first Digital Industrial Company, General Electric (GE) expects to grow its additive manufacturing revenue to $1 billion by 2020 while reducing production cost.

In a 2016 meeting with investors, Jeff Immelt, GE’s Chairman and CEO, predicted the additive manufacturing arm of the business to yield $300 million in revenue for 2017, with that amount more than tripling to $1 billion by 2020.

More Than Talk: GE Is All-In for AM

GE’s AM initiative carries more weight than just the usual bluster from a flurry of press releases and optimistic speeches during the pomp of product roll-outs, however. In fact, not only have they invested in additive manufacturing infrastructure, they are going all-in to make AM a core component of their operational model. 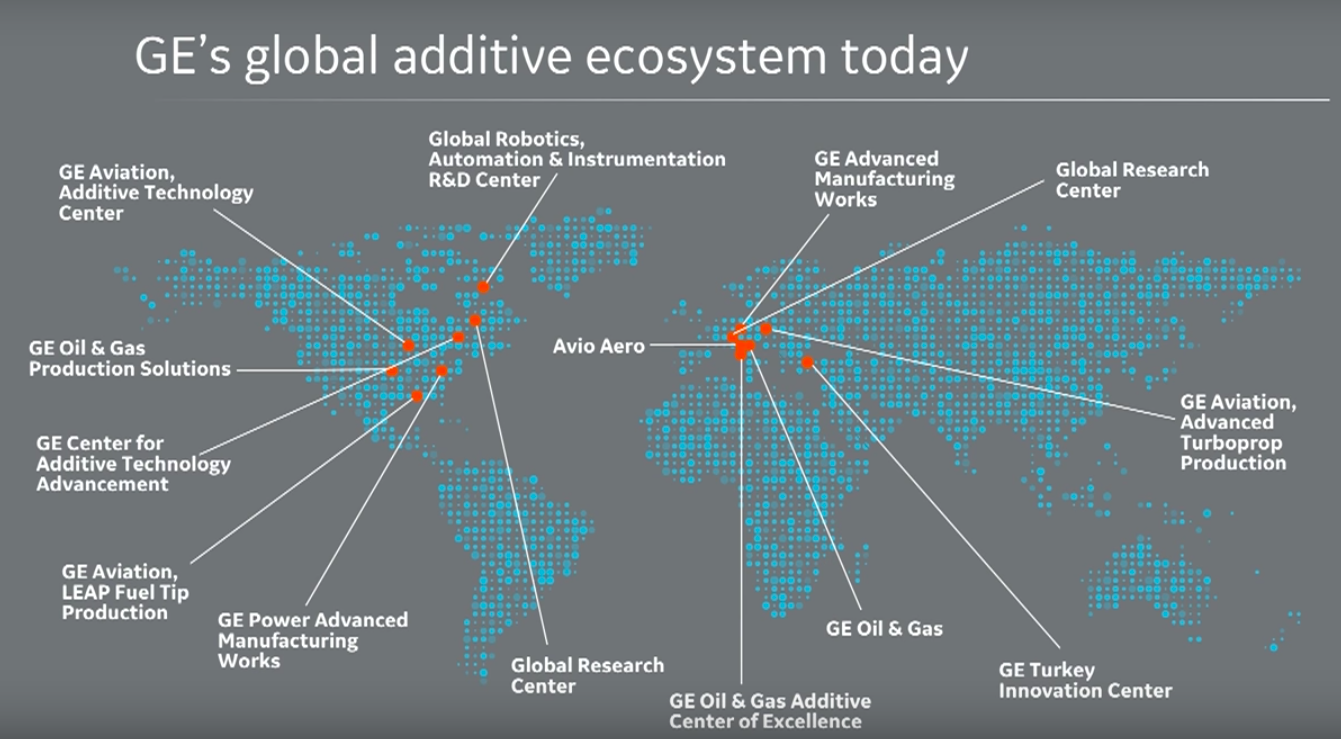 Already GE has more than 400 3D printers in operation, and they’ve been working overtime.

In July 2016, GE Aviation introduced 3D-printed fuel nozzle interiors, which were GE’s first additive jet engine component produced at GE Aviation’s Auburn, Alabama, manufacturing plant. And production of those metal AM fuel nozzles will soar, with orders for another 40,000 by 2020.

Early in 2017, GE Aviation announced commitments for the GE9X jet engine designed for a Boeing wide-body passenger jet. The GE9x won’t fly the friendly skies until 2020, but when it does, it will be the world’s largest engine and will incorporate 3D-printed parts that include ceramic-matrix composites (CMCs).

GE is also not just building AM capabilities from scratch. They’re also beefing up their capabilities through acquisitions, like the $1.4 billion purchase of two additive manufacturing equipment supplies, Arcam AB and SLM Solutions Group AG.

Kirk Rogers, GE’s Technology Leader at the Pittsburgh CATA, believes the investment will pay off on multiple levels without “squeezing the supply chain” or offshoring. He estimated that GE will recoup $3 billion-$5 billion within 10 years through AM and intelligent design by reducing part count.

“About 85% of parts that are made by additive need post processing need conventional machining. They need heat treating. They need surface finishing. They need painting whatever the application room requires after the additive technology. So AM isn’t replacing so much as it’s augmenting production with a new set of technologies for high-value components and things that can be re-engineered specifically to take advantage of generative design and arbitrary shape.”

Is Your Factory Brilliant Yet? AM’s Effect on Manufacturing Jobs

GE is thinking beyond parts manufacturing. They are laying the foundation for a reimagined workforce.

Additive manufacturing allows GE to design components anywhere in the world and print them to exact specifications in a much smaller factory (instead of a large-scale manufacturing line) in any part of their global operation’s footprint.

It’s no surprise that the rapid adoption of 3D printing will transform GE’s supply chain. To GE, additive manufacturing represents an opportunity to decrease production costs and eliminate the false dichotomy of “offshoring versus onshoring”. By establishing micro-factories around the globe, they’re turning the entire labor model on its ear.

According to Kurt Goodwin, an executive in GE Power’s Advanced Manufacturing operations:

They’re decentralizing production  –  or maybe it’s more like GE is unpinning manufacturing from the map.

Human Collaborators in the Rise of the Robots

AM is a smaller part of GE’s other AM  –  Advanced Manufacturing  –  where automation technologies fuel real-time workflows, informed by products with built-in sensors to drive continual data-driven improvements.

GE estimates that 13 percent of US jobs already are part of the Advanced Manufacturing model, already contributing $3.1 trillion to the U.S. GDP. Their thought is that human labor remains essential to the success of the Brilliant Factory, but the skills required by workers need to change.

For example, when GE incorporated its first additive manufacturing product line into an existing Greenville, South Carolina plant, workers needed retraining. No longer did plant workers need to physically move as many parts and materials around the facility. Automation created a more efficient micro-distribution process.

Not every business needs to invest billions of dollars in an all-in strategy for additive manufacturing. But that doesn’t mean the small- and mid-sized manufacturers need to be frozen out on the innovation front.

Companies like 3DEO make metal additive manufacturing a realistic and cost-effective option to produce complex part designs while reducing the cost per part.

Contact us for a no-obligation discussion to see if 3DEO’s proprietary metal 3D printing process is a good fit for your requirements.