3DEO in the News: Engineering.com Article 3D printing is currently in the midst of an evolution, demonstrated by the development of rapid systems capable of unique materials that may be able to ultimately reduce the cost per part of additive manufacturing (AM) technology. Among the categories of AM being affected is metal 3D printing, which has seen a number of companies—including Markforged, Desktop Metal and Admatec—unveil new processes that may reduce the typically costly technology.

Markforged and Desktop Metal, in particular, are using materials and post-processing techniques associated with metal injection molding (MIM) to cut materials costs, while opening up the feedstock portfolio to those found in MIM. Those two firms aren’t the only ones to have discovered the benefits of MIM for AM. 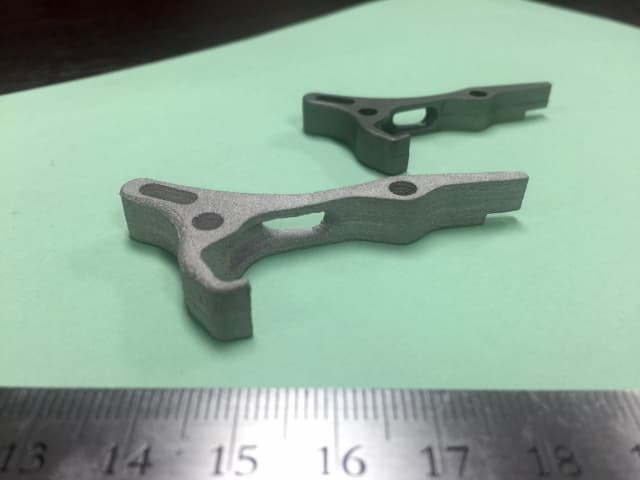 In the foreground, a stainless steel part 3D-printed with 3DEO’s Intelligent Layering process. In the background, the same part made via MIM. (Image courtesy of 3DEO.)

3DEO, based in Los Angeles, Calif., may have found a method for dropping metal AM costs even further, while also enabling mass production. ENGINEERING.com spoke to 3DEO’s Lance Kallman, vice president of business development, and Matt Sand, president, who explained the company’s unique technology, dubbed “Intelligent Layering,” and its business model.

What Is Intelligent Layering?

With a first look, Intelligent Layering bears some resemblance to binder jetting: A thin layer of metal powder is spread across an 8-in x 8-in build tray before a binder is applied to the material. Whereas the binder in binder jetting is deposited in a very precise manner, Intelligent Layering features a “reliable, low-cost spray head,” as Kallman described it, in that the binder is deposited across the entire print bed. 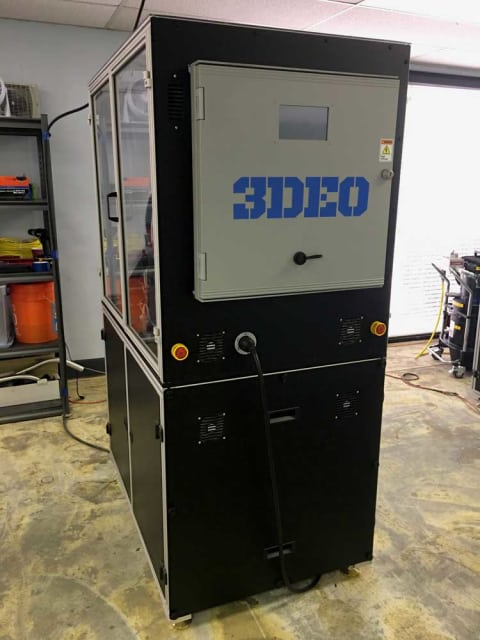 That’s because the binder deposition isn’t used to create the ultimate shape of the part. Instead, a CNC mill does the work, tracing the outline of the part after the binder has been sprayed. This process is repeated until the part is complete. Once built, the green-state object is sintered in a furnace, typical of the MIM process.

The Benefits of Intelligent Layering

The use of a CNC head brings a number of benefits to Intelligent Layering not seen in other metal 3D printing technologies. Kallman explained that, if the object being printed has a continuous shape for multiple layers, such as a cylinder, the Intelligent Layering process can maximize speed by laying down multiple layers of powder and binder and then cutting 10-20 at a time.

The built-in CNC mill can also make it possible to improve the resolution of the print. The layer thickness of Intelligent Layering is 100 μm, but the CNC mill can cut 20 microns down at a time
into a given layer to improve feature resolution. 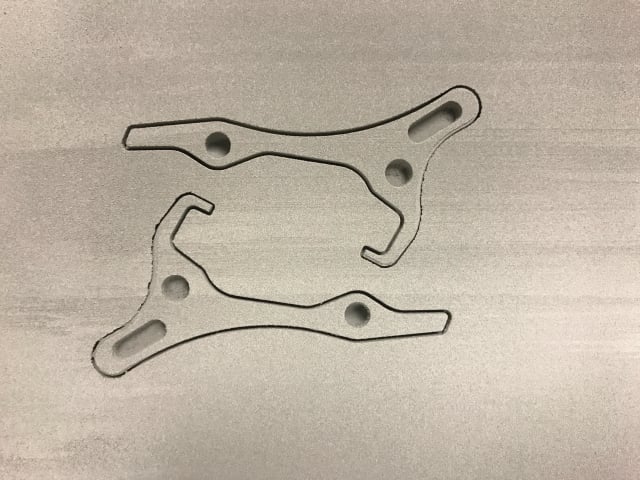 Parts that have been cut by the built-in CNC mill. (Image courtesy of 3DEO.)
This benefit is particularly useful when 3D printing features that are spherical or have an up-facing slope. Though most 3D-printed metal parts exhibit a stair-stepping characteristic, in which the Z-axis resolution is determined by the thickness of the powder layer, with Intelligent Layering, the three-axis CNC head can mill a perfectly rounded shape.

In a process like selective laser melting (SLM), the parts might suffer from 50 to 70 percent tensile strength on the Z-axis compared to the X- and Y-axes, due to the weaker bonds between layers. However, in processes like Intelligent Layering, the green, printed object is subsequently sintered in a furnace, fusing the layers together and achieving isotropic strength in all axes.

Parts experience 15 to 20 percent shrinkage in the furnace, but this is something that is accounted for in 3DEO’s software. “Part of what we’re developing now is the software to be able to predict part behavior,” explained Sand. “That is going to be a part of our IP: predictive shrinkage.”

The Costs of Metal 3D Printing

As interesting as all of these benefits are, it is the cost of metal 3D printing that is preventing it from widespread adoption. “When we looked at the price of metal 3D printing, about 42 percent of the market said that cost is the number-one barrier to entry. The average machine might cost around $450,000 just to start.”

For this reason, cost per part has been a key differentiator for 3DEO as it has been developing its technology. Intelligent Layering aims to reduce cost in a number of different ways.

First of all, Intelligent Layering doesn’t rely on a high-powered laser, as seen with SLM, or an inkjet head, as seen in binder jetting. It is much cheaper and requires much less maintenance. Additionally, metal powders have already been developed for MIM that may be up to 10 times less expensive than those developed for SLM.

“Even binder jetting is expensive, including the maintenance of the machine,” Sand said. “The inkjet head for a $450,000 machine may require $75,000 in maintenance just to maintain the inkjet print head.”

For the cost of one or two SLM or binder jetting systems, the company believes it will be possible to run an entire fleet of Intelligent Layering machines as 3DEO refines the process. The technology will also be significantly less expensive when used for low- to medium-batch production because it reduces the cost per part by increasing the number of parts produced at once. This approach fits directly into the company’s business model.

Rather than take its technology directly to market through the sale of machines, like Markforged and Desktop Metal, 3DEO is entering the marketplace as a service provider. This enables the company full control of its technology to ensure optimal quality for its customers. A portion of this quality is dependent upon experience with MIM processes and post-processing.

“We’re piggybacking off of the MIM industry, in which there are over 30 years of experience and real experts,” Kallman explained. “Sintering takes a lot of skill to get it right. There’s a lot of dialing in right now from a software perspective and from a sintering perspective. We’re keeping the technology in-house today to ensure high-quality parts for our customers.” 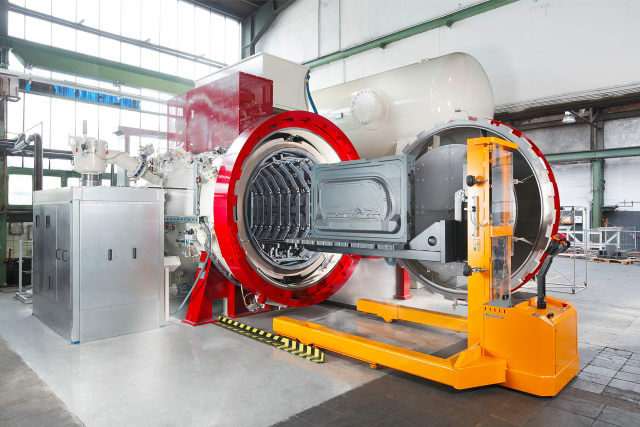 Though Kallman said that they may consider putting its machines onto the marketplace in a few years, for now, 3DEO is focusing on being a service provider with costs low enough for batch production.

“We’re really going after high-volume applications,” Sand added. “If it’s less than 100 pieces today, we’re not even looking at it. If you’re printing with most service bureaus and when you start getting into batches of 10s and 20s, you become low preference because you’re talking about tying up machines for weeks and months.”

Currently, 3DEO’s technology can work with 17-4PH stainless steel, but Sand believes that the company will have two more materials from two additional material families qualified by the end of the year. To tackle the medical and dental market, Sand believes that cobalt chrome will be tackled next, followed by Inconel for high-end applications.

A so-far unstated benefit of piggybacking off of the MIM industry is the fact that standards already exist for MIM. “We start with an MIM powder feedstock, we use a MIM binder and then we put it into an MIM furnace,” Kallman said. “Intelligent Layering has been developed with MPIF Standard 35 in mind so that we don’t have to go through all of the qualifications, headaches and nightmares that a lot of the other processes require.”

With much of the process already adhering to existing standards, it’s possible that Intelligent Layering may more quickly and easily be integrated into the manufacturing supply chain, particularly by businesses already using MIM.

3DEO is still new, founded just last year, so there’s still plenty of news from them in the works. For instance, we’ll hopefully hear of some case studies of just how beneficial Intelligent Layering can be at some point in the near future. Until then, learn more about 3DEO at the company website.

As seen on Engineering.com 3DEO In the News: How to Make 3D Printing Better